hey, friends! how is monday treating you? I hope you’re having a lovely day ❤

today I’m going to be sharing 9 quotes from (or inspired by) scripture that I pray will help you grow + be inspired today!

END_OF_DOCUMENT_TOKEN_TO_BE_REPLACED

If you’re considering reading your bible cover to cover in a year (but have a lot of excuses) let me assure you that it CAN be done and,honestly, if you read just a little bit every day IT WILL!!

END_OF_DOCUMENT_TOKEN_TO_BE_REPLACED

Because of Easter, I decided to do a little mini-series called “Reality” about the promise of Jesus. Stick around if you haven’t heard this promise, and if you have, I’d love for you to read this anyway!

On Friday, we talked about how we have all sinned and how we could never save ourselves. Today, which is Easter Sunday, we’re going to talk more about Jesus’ death and the gift of salvation.

What I’m going to talk about today can be summed up in many verses (a big list is below), but the main one I’m going to use is 1 Corinthians 15: 3-6

For I delivered to you as of first importance what I also received: that Christ died for our sins in accordance with the Scriptures, that he was buried, that he was raised on the third day in accordance with the Scriptures, and that he appeared to Cephas, then to the twelve. Then he appeared to more than five hundred brothers at one time, most of whom are still alive, though some have fallen asleep.

This passage says that…

Today is Easter Sunday, which is the day that Jesus rose again. He died on Good Friday (Friday).

When Jesus died, he took all of our sins on his back if we trust in him.

But if Jesus had just died, there would be no point in trusting in him.

But Jesus didn’t just die! No! He rose again three days later, defeating sin and death forever. And he did it all for you and me.

If you trust in God’s free gift through Jesus and want to have salvation, you can pray and ask God for it.

There’s no specific prayer you have to pray, but you should confess your sin and accept and believe in Jesus Christ.

These bible verses all sum up the Gospel- if you have some time, reading all of them is really helpful:

He was pierced for our transgressions, he was crushed for our iniquities; the punishment that brought us peace was upon him, and by his wounds we are healed (Isa. 53:5)

For even the Son of Man did not come to be served, but to serve, and give his life as a ransom for many (Mark 10:45)

God so loved the world that he gave his one and only Son, that whoever believes in him should not perish but have eternal life (John 3:16)

All the prophets testify about him that everyone who believes in him receives forgiveness of sins through his name (Acts 10:43)

Through Jesus the forgiveness of sins is proclaimed to you. Through him everyone who believes is justified from everything you could not be justified from by the Law of Moses (Acts 13:38-39)

He was delivered over to death for our sins and was raised to life for our justification (Rom. 4:25)

But God demonstrates his own love for us in this: while we were still sinners, Christ died for us (Rom. 5:8)

God was in Christ, reconciling the world to himself, not counting men’s trespasses against them (2 Cor. 5:19)

God made him who knew no sin to be sin for us, that we might become the righteousness of God in him (2 Cor. 5:21)

Remember Jesus Christ, raised from the dead, descended from David: this is my Gospel (2 Tim. 2:8)

He gave himself for us to redeem us from all wickedness and to purify for himself a people that are his very own, eager to do what is good (Titus 2:14)

But when the goodness and loving kindness of God our Savior appeared,he saved us, not because of works done by us in righteousness, but according to his own mercy, by the washing of regeneration and renewal of the Holy Spirit,whom he poured out on us richly through Jesus Christ our Savior,so that being justified by his grace we might become heirs according to the hope of eternal life. (Titus 3:4-7)

Christ was sacrificed once to take away the sins of many people; and will appear a second time, not to bear sin, but to bring salvation to those who are waiting for him (Heb. 9:28)

He himself bore our sins in his body on the tree, so that we might die to sins and live for righteousness; by his wounds you have been healed  (Peter 2:24)

Christ died for sins once for all, the righteous for the unrighteous, to bring you to God (1 Peter 3:1)

This is love: not that we loved God, but that he loved us and sent his Son as an atoning sacrifice for our sins (1 John 4:10)

Because of Easter, I decided to do a little mini-series called “Reality” about the promise of Jesus. Stick around if you haven’t heard this promise, and if you have, I’d love for you to read this anyway!

For all have sinned and fall short of the glory of God.

“Sure!” You say. “I may have done that… but I haven’t murdered anyone. I haven’t committed adultery or stolen a car.”

For whoever keeps the whole law but fails in one point has become accountable for all of it.

If you do everything God asks but fail in one “tiny little thing”, you’ve sinned. And you are no longer holy. In really simple terms, holy means “set apart”. God is completely holy because he has never sinned, and when we sin, we can no longer be with God.

Romans 3:23 in the bible sums up our predicament perfectly:

“For all have sinned and all fall short of the glory of God.”

So what can we do?

God gives us many rules, laws, and commandments that we can never follow. God told the Israelites to do many sacrifices- this is how they made peace with God. They could never fully be with God, however. They had to constantly preform sacrifices when they sinned, so they were really never clean.

By ourselves, we can do absolutely nothing about our sin. And that leads into grace.

Simply, grace is “unmerited favor”. God gives us favor when we don’t deserve it at all. We have done nothing to deserve God’s favor, but he gives it to us.

and are justified by his grace as a gift, through the redemption that is in Christ Jesus.

Together, the verses say:

For all have sinned and fall short of the glory of God, and are justified by his grace as a gift, through the redemption that is in Christ Jesus.

That is the Gospel. We sin and can’t do anything about it by ourselves, but God sent his son as a free gift to justify us.

God sent his son, Jesus to earth as a man. Jesus died on the cross with all our sins on his back. He took all our sins, and when we trust in him alone, he saves us.

One  thing that a lot of people get wrong is that salvation is a gift. It’s not something you can earn, ever.

This sunday, which is Easter, I’ll be continuing this mini series and talking more about Jesus’ death and the gift of salvation.

Another last-minute post idea. Haha. Anyway, today’s post is going to be all about my favorite encouraging bible verses. All the pretty images are from Hello Joy Co (formerly French Press Mornings) because they’re so cute! 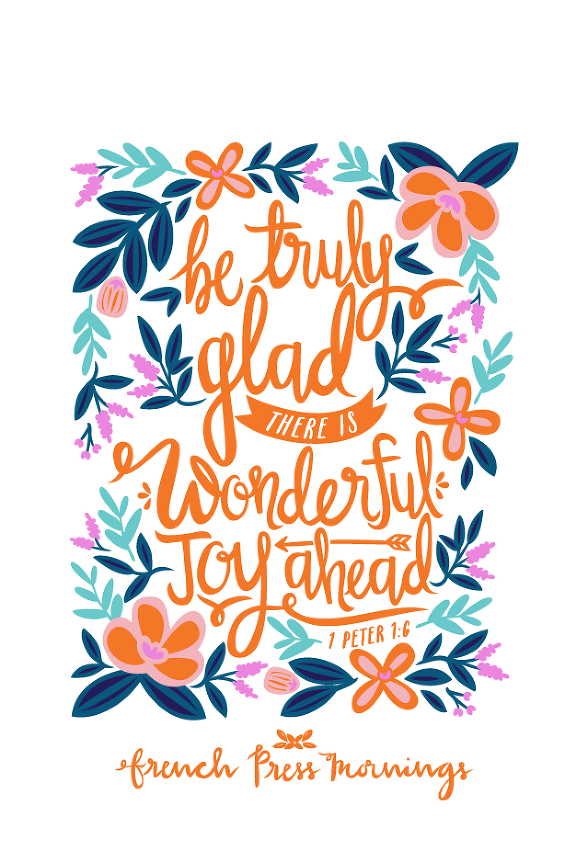 1 Peter 1: 6- Be truly glad. There is wonderful joy ahead 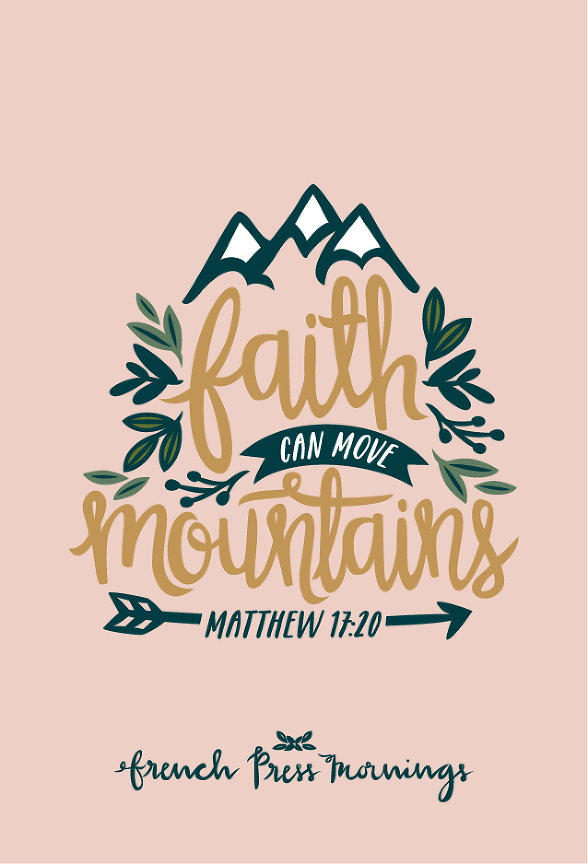 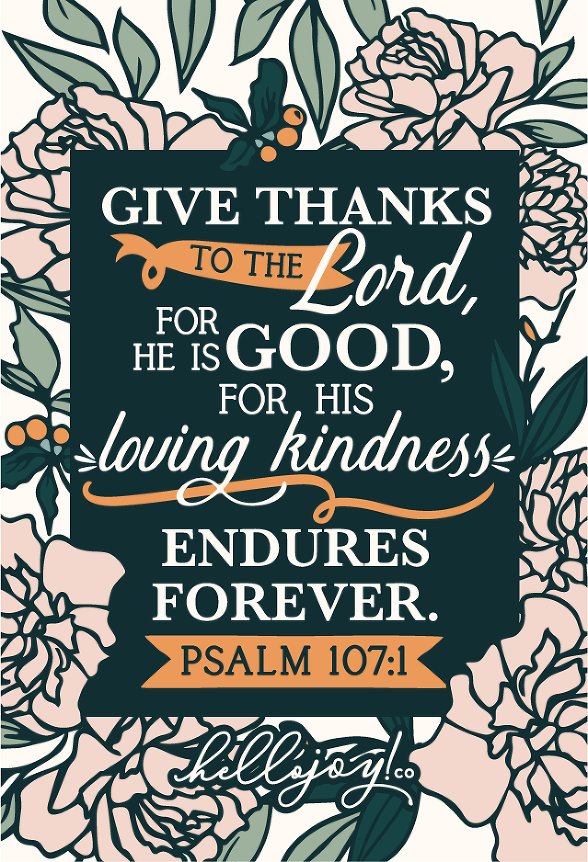 Psalm 107:1- Give thanks to the Lord, for he is good, for his loving kindness endures forever. 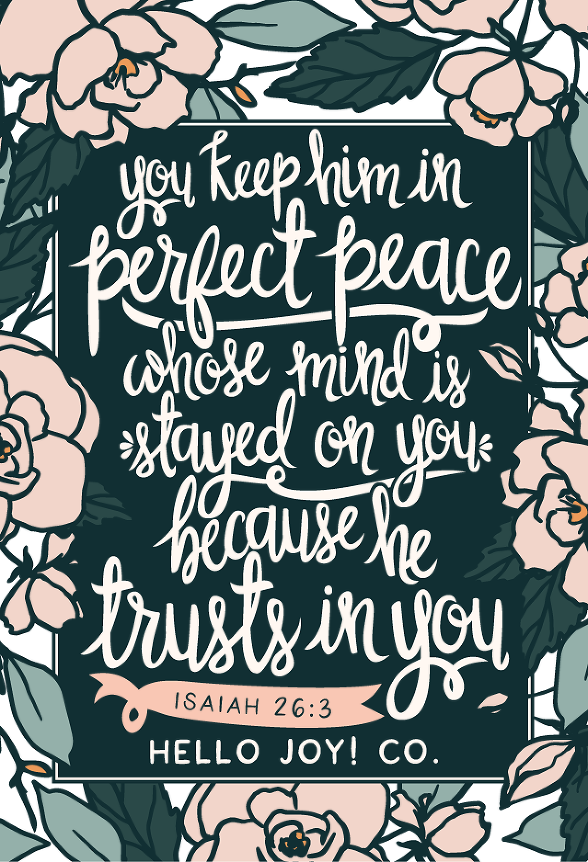 Isaiah 26:3- You keep him in perfect peace whose mind is stayed on you because he trusts in you.

Hebrews 11:1 – Faith is confidence in what we hope for and assurance about what we do not see. 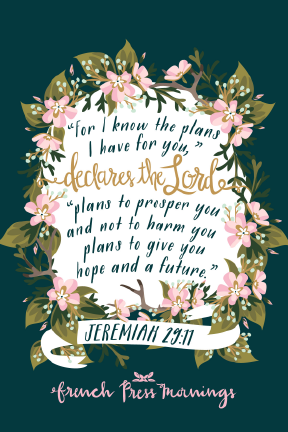 Jeremiah 29:11- For I know the plans I have for you, declares the Lord, plans to prosper you and not to harm you, plans to give you hope and a future. 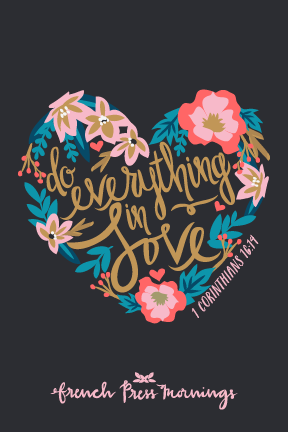 I Corinthians 16:19- Do everything in love 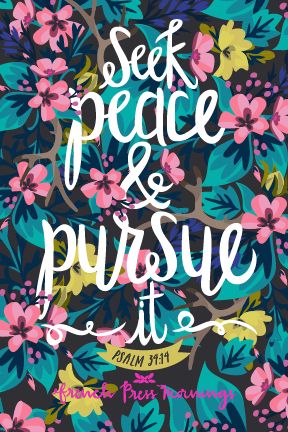 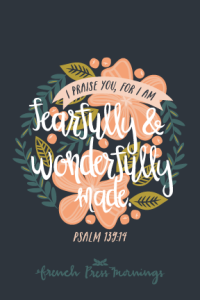 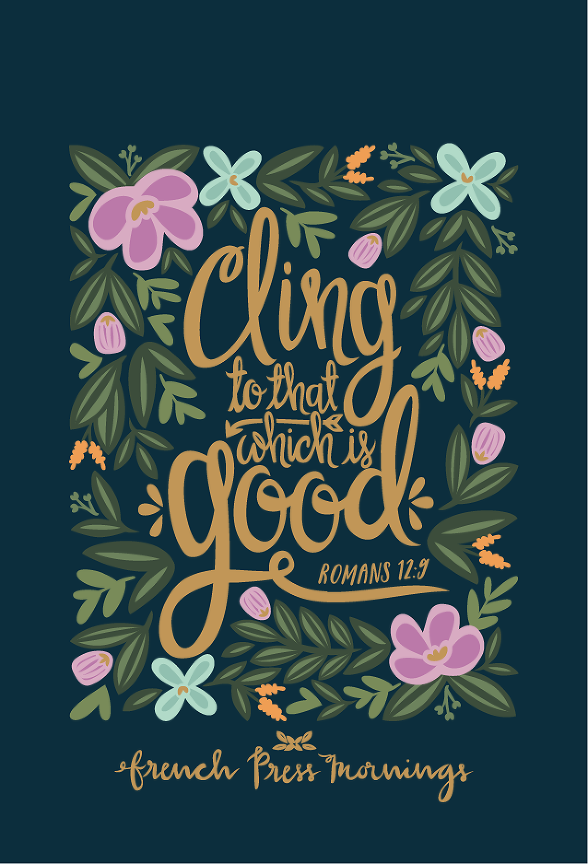 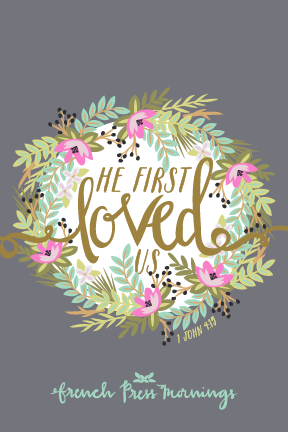 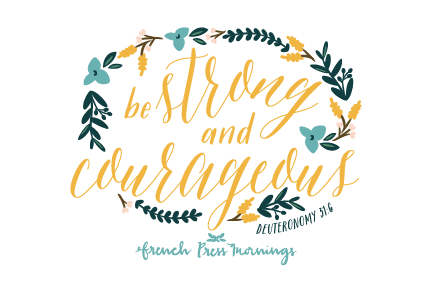 Deuteronomy 31:6 – be strong and courageous

Wow- it was so hard to pick! Plus I couldn’t find some of my favorite bible verses, but that’s okay 🙂 Every verse in the bible is great! Anyway, see you all on Friday!

interact with the tribe